This is the happiest country in the world 2021

Ever wondered which is the happiest country in the world? Happiness is a difficult metric to judge and one that the United Nations has long been trying to decipher. Since 2012, the United Nations has published a World Happiness Report, which analyses the connection between happiness and development by country. In our blog, we’ll be taking a look at how happiness is measured, and which country is at the top of the list.

How Is Happiness Measured?

There are 6 key areas that the UN focuses on in its report to help measure happiness by country. These include:

What Is The Happiest Country In The World?

Well, for the fifth time in a row, Finland has been voted the happiest country in the world for 2022 by the World Happiness Report, with Denmark and Iceland not far behind. 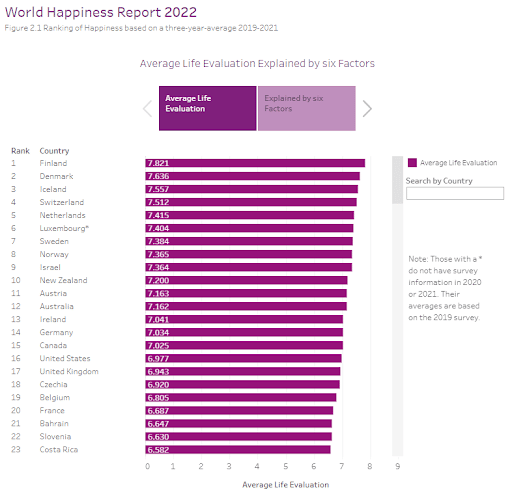 Why Is Finland The Happiest Country?

Start to life – The Finnish Government ensures that you are set up from birth with a box, which is also a crib, filled with essentials for the first few weeks of a baby’s life such as diapers, bottles, and formula. If parents already have what they need then they can have a monetary contribution instead.

Equality – Finland is particularly committed to fighting for equality in many aspects. For example, by closing the wage gap and fighting for access to high-quality education for all. Maternity and paternity are also treated the same, meaning that fathers also get a longer time off than in most other countries in the world.

Education – Education is free of charge, so everyone has access to it, and children are also rarely tested at a young age. Finland has one of the best education systems in the world.

Healthcare – Public healthcare is available to all permanent residents in Finland regardless of their financial situation. Every customer has access to healthcare, even if they are simply visiting the country.

Working Life – There is a flat working model which means that there are few to no hierarchical levels between management and staff. Therefore there is less supervision, leading to more productive decision-making and involvement with the staff. It also creates more open communication between teams and a faster workflow. Work-life is overall happier.

Another reason why Finland scored so high is they have an agile working policy, there is little restraint about where and when work is completed, and the focus is placed on how people work in a team and how productive they are. This ensures a better work-life balance as people have more freedom to work around their individual schedules.

Industry – Finland is a world leader in ICT, paper and pulp industries, many Multinational corporations have set up headquarters in Finland such as Nike, Supercell and Polar.

Freedom – The Finnish people have an inherent understanding of freedom, their mentality is that freedom and independence are only possible if everyone enjoys them, and people just get on with their lives without outside interference.

Safety – Finland consistently ranks as one of the safest countries in the world. Whilst smaller crimes are still apparent in urban areas (pickpocketing, for example), Finland is generally a very safe place to live. A 2018 study also found that 80% of the Finnish population trust and supports the police leading to a higher sense of security. Homelessness is almost a non-issue as anyone who finds themselves struggling is given support and then assisted into owning their own home.

There is a Finnish saying, “happiness will end in tears”, which to most might sound harsh but it just means that good things won’t last forever, and bad things won’t last forever either. Life is as good and as bad as you make it. The Finnish also have the word ‘Sisu’ which means the personal strength of will that is seen in the steadfast diligence and humility of the people about their affairs. There is no direct English translation.

Why not contact GMS today for a free no-obligation quote and find out how we can help you move to the happiest country on the globe? Check out our moving guide for more information on moving to Finland.